The MSA is the diffuser which allows the maximum volume of air by area in its category by offering the maximum number of rollers possible. 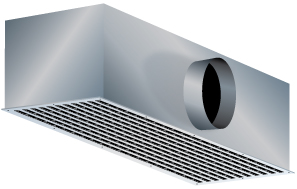 Each diffuser is supplied with a stabilising chamber, allowing for a uniform and silent airflow.

It is an adjustable diffuser with a square or rectangular frontal plate and integrated parallel vents composed of eccentric ABS rollers inserted in an extruded aluminum profile.

The MSA can be adapted to optimize a ventilation system in any type of space. Thanks to the ability to turn the eccentric rollers, any type of air flow can be obtained even after installation.

• The largest volume of air by area.

• Possibility of changing the airflow even after installation.

• Possibility of varying the speed of the expelled air.

• Eccentric rollers which can be rotate up to 180˚.

• Possibility of reducing total airflow rate as much as 25% in VAV.